The weather forecast has been calling for low 40 degree temps in the morning all week, and today it felt the coldest. After finding my flannel shirt a few weeks ago, I ended up buying a cheap hoodie at the Dollar General store just in case the temperature dropped again, and this week it sure has. Lastnight and this morning, I was especially happy to have and extra layer and I kept it on under the flannel until about 11am. It’s important to note how cold it is, because a dangerous situation happened this morning that could have ended badly. I’ll explain shortly.

Gray Beard was up and moving at 6:30 this morning to get a jump on the trail again. He wanted to check out a section of trail that is closed when the swamp floods, and he wanted to see if it was passable or if he would have to back track to the reroute. Mickey and I took the van up trail and we started heading his way at around 8am. For the first 2.5 miles, our section was wide open easy trail, and Gray Beard let us know that although the swamp was mucky, it was passable. So, knowing it would be a short 15 mile day of decent trail, we took an early break where the trail ran near the highway and up on a hill overlooking everything. Besides being cold, it was shapping up to be a good day. That was, until Gray Beard sent us a video of himself dripping wet from the neck down! He had tripped over a branch at the absolute wrong place and stumbled into the chest deep flowing waters of a creek! Being wet in Florida usually isn’t a bad deal (people pay good money to do just that) but when it’s 40 something degrees outside, it can change a good day into a quick emergency. Worst even, was that he didn’t have a way to make fire and had to rely on the sun breaking through the clouds for warmth. He did the right thing by moving to a wind protected area and stripping down to dry himself and his clothes off, but that didn’t stop his body from going into violent shivering for a spell. Luck being on his side, the sky cleared up and the sun warmed his body enough that he could put on his quick dry clothes and start hiking again after about 30 minutes of suffrage.

By the time we caught up to Gray Beard a few hours later, he was all smiles as usual with fresh picked flowers tucked into his facemask and he was laughing as he retold his story. I’m constantly impressed with this 83 year old adventurer and his ability to bounce back from precarious situations. He did let us know that the swampy section was two half mile stretches but they were only muddy, not wet (if we keep out of the creek), and we let him know that rest of his miles are high and dry.

Mickey and I spent the rest of our hike going slow and enjoying the scenery around us until we got to the swamps. There, we had to root hop around the deep thick mud like a giant maze/puzzle game. If you pick the wrong path by not looking far enough ahead, the game gets pretty rough as you try to backtrack or find a new route while balancing on cypress knees or half sunk logs. It was slow going, and really the mud was only about ankle deep for the most part, but sometimes our trekking poles would sink all the way down without ever touching hard ground through the mud, so it was necessary to root hop. After we emerged from the swamps, it was just a short two miles to the end of day, and although we took it slow, we were at camp making ramen and stove top stuffing dinners in our camp pots by 6pm.

With another great day finished, we sat around in the last of the daylight and figured out the logistics of moving the van tomorrow, and if all goes well, it will be another 15 mile day. I’ve also been messaging Treehouse who has been closing the gap between us, and will finally catch up sometime tomorrow. I met him briefly outside Clewiston on his SOBO section and we have kept in touch since. It will be nice to add a new member to our team soon (If he can hike as slow as us, that is :)). 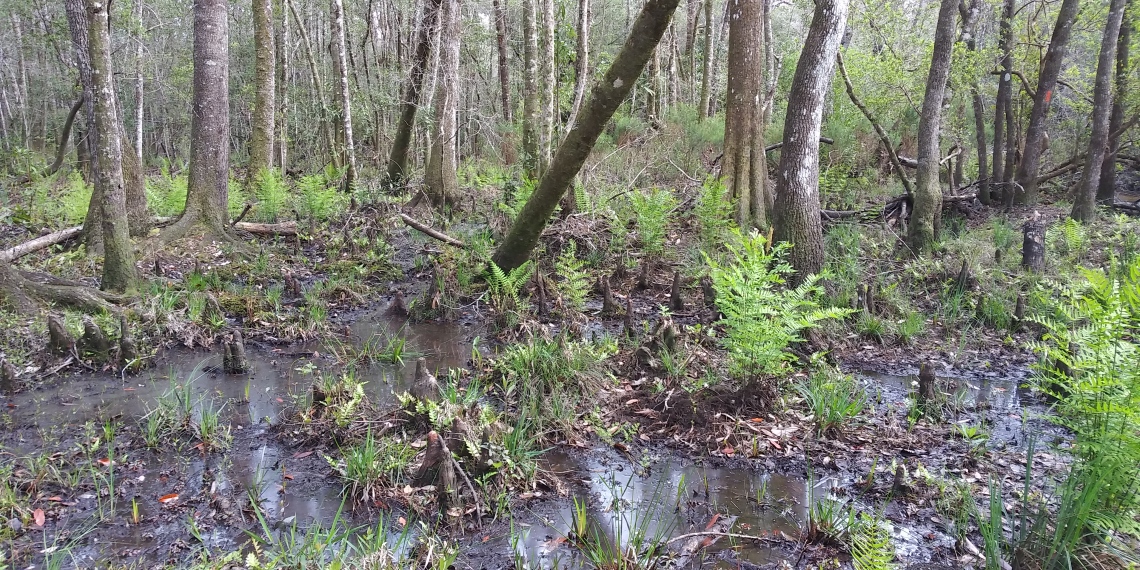 A bit of the root hop maze game 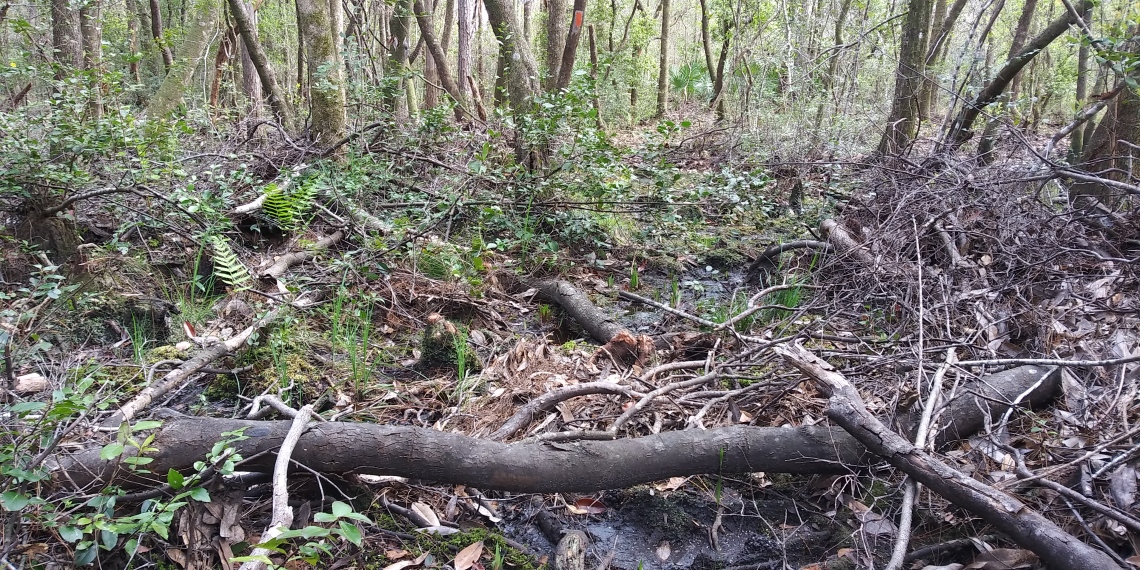 Swampy section, not the worst trail, but not the best

The Creek that Grey Beard fell into

A brush tunnel for critters, only tall enough to crawl through (not the trail) 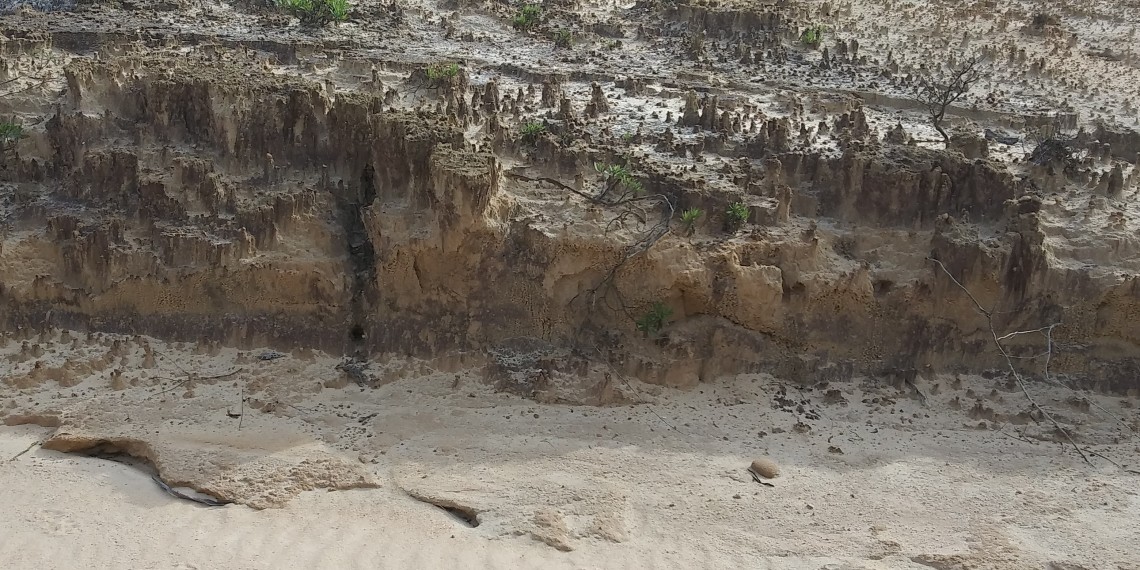 Perspective. This looks like a shot from across a canyon, but its a washed out sand road 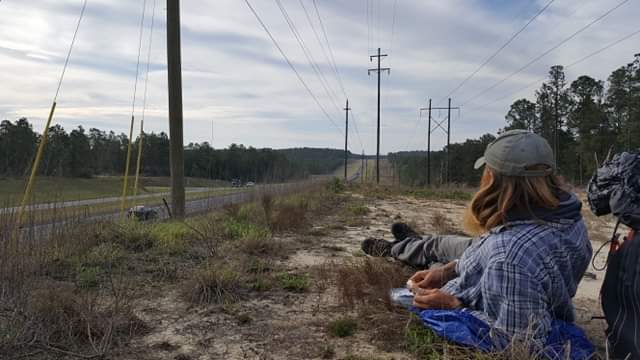 Taking a break overlooking the highway