I experienced one of the best night’s of sleep imaginable last night. The open air 3 sided shelter had a tin roof on it and as the rains came pouring down the rhythmic sounds echoed lightly through the shelter producing the most relaxing melody to fall asleep to. I layed in my hammock enjoying those sounds while fighting off sleep for as long as I could until I found myself waking up to the same rhythm at morning light.

As I got up and packed my gear to leave, I had my little radio playing on an AM station for a weather update. The clouds were blocking out my already weak signal on my phone so I couldn’t get the weather app to load. The radio gave a weather update about every 10 minutes but it was always the same “rain in the morning, heavy at times, then cloudy and cool in the evening, low of 46”. Hmmm, I thought… Low of 46 will seem mighty chilly if I’m soaked through. So I made the decision to stay in my shelter until the rain cleared up. The original plan was to do a 20 mile hike to the town of Paisley, but I thought I better cut that short if I’m leaving late. I checked my new phone for the map app and found it hadn’t fully downloaded at McDonald’s yesterday, so it wasn’t working. My old phones map app is still functional, and I good spot to camp 15 miles away. The plan was set and I waited until the sky looked clear enough to only get a light rain on me, and at 10:20am I was off.

On my map app I was looking for a good water source, as it tells you where the ponds and streams are, and I saw a spot called ‘shark tooth spring’. That sounded interesting, so I clicked the more info tab to learn that it got it’s name because it actually pumps out ancient sharks teeth from time to time. I new I had to at least check it out and set it as my short term goal.

The hike there was only a few miles, but the trail ran alongside a couple of ponds that had flooded way over the trail. I spent a lot of time bushwacking my way through the overgrown palms all the while trying to keep my feet dry, my gear attached to my pack and not getting cut by their little barbs the run down like a saw blade on either side of the frond stems. It was fun and miserable all at the same time, but I’m glad it was part of my day to keep things interesting. As I got to ‘shark tooth spring’ I had to climb down a steep and muddy hillside to get down to it. Other folks had done it before me, so it was kinda trail-ish getting there. I was surprised to see how crystal clear the water was coming from it’s little cave and I happily filled my water bottle with fluid that I could see through (that’s a first). I looked for a few minutes to see if any shark teeth were available to snag, but I couldn’t find any. What I did have was a fresh clean water supply to get me along, so I was happy with that and a photo.

Half way through my planned 15 mile hike was a parking lot for a trail head that was just before the short 2 mile road walk I’d have. I decided that was a fine place for chow, so I sat on a little bench seat and ate my ramen and mashed potatoes combo that I’ve come to enjoy. As I was finishing up my meal, a car pulled in and a day hiker came out to hike a loop trail. I introduced myself and he did the same as “Troy”. We talked about hiking and gear for a long time and had a lot in common. He said he was hiking to build up his miles on the Florida Trails system and hopes to through hike someday soon (maybe the AT next year). We talked about gear a little longer, but both had 7 miles left in our day, so we parted ways.

As I was hiking my second half, I was trying to formulate a plan for tomorrow and the next day. I new I had to detour into Paisley in the morning so I could go to the library for their WiFi to download the map app fully, but also toyed with the idea of doing it tonight. It would be a hard 20 mile day, and probably some night hiking, but that would free up all day tomorrow to get to buck lake, a beautiful lake I camped at on my practice hike in October. It wasn’t long after checking my mileage and speed that my friend, Josh called to check up on me. I told him my plan for Paisley, and he called the library from another phone to see if they had 24hr free WiFi, which they do. A new plan was set.

As I hiked past the originally planned campsite, my body was confused as to why mind was pushing on. It was however 5pm, which is when I usually get off trail, but my feet and legs would have to suck up the overtime work. The next 5 miles actually went by pretty quickly, and I was on the road leading into Paisley by the time I had use my headlamp. It’s one of those $1.00 lights that runs off a watch battery and clips to the bill of my hat, so I rarely use it, but it lights up my path enough to step over sticks, and it let’s cars know that I’m there. Anyway 🙂 I made it to the library and sure enough there was WiFi to get my map app fully loaded, and there was a great set of trees to stealth camp from just beyond the security lights glow, but I couldn’t find a power outlet to charge my external battery pack. It is now in the critically low stage since I haven’t been able to use the solar panels for the past four or five days due to weather. Although it was getting late and cold (I can see my breath at this point) I decided to hike the mile or so back to Clearwater Lake campground and see about getting a spot with a power hook up. When I got to the campground at 7:45 (they close at 8pm) the front check-in was empty with the lights off. I saw a little sign that said the camp manager lived just up the hill, so there I went.

I was greated by a lady with a big smile and she was happy to see a through hiker. I explained that I needed a spot with power to camp at, but she said there were not any of those here, but I could just plug into the outlet at the back of the check-in station for as long as I needed, then go camp back on the trail for free. That sounded like a win to me so back down the hill I went. At the check-in station I plugged in my external battery and my phone, and I typed this blog while I let things power up for a couple of hours. I was pretty sweaty from todays hike and sitting in the cold wasn’t working, so I ended up wrapping myself up with my cammo woobie tight around me looking like a real homeless vet until 10pm. It was a nice thing for the park manager to let me do that, so want I want to give a public thank you to Clearwater lake campground for their hospitality and getting me going again, free of charge. 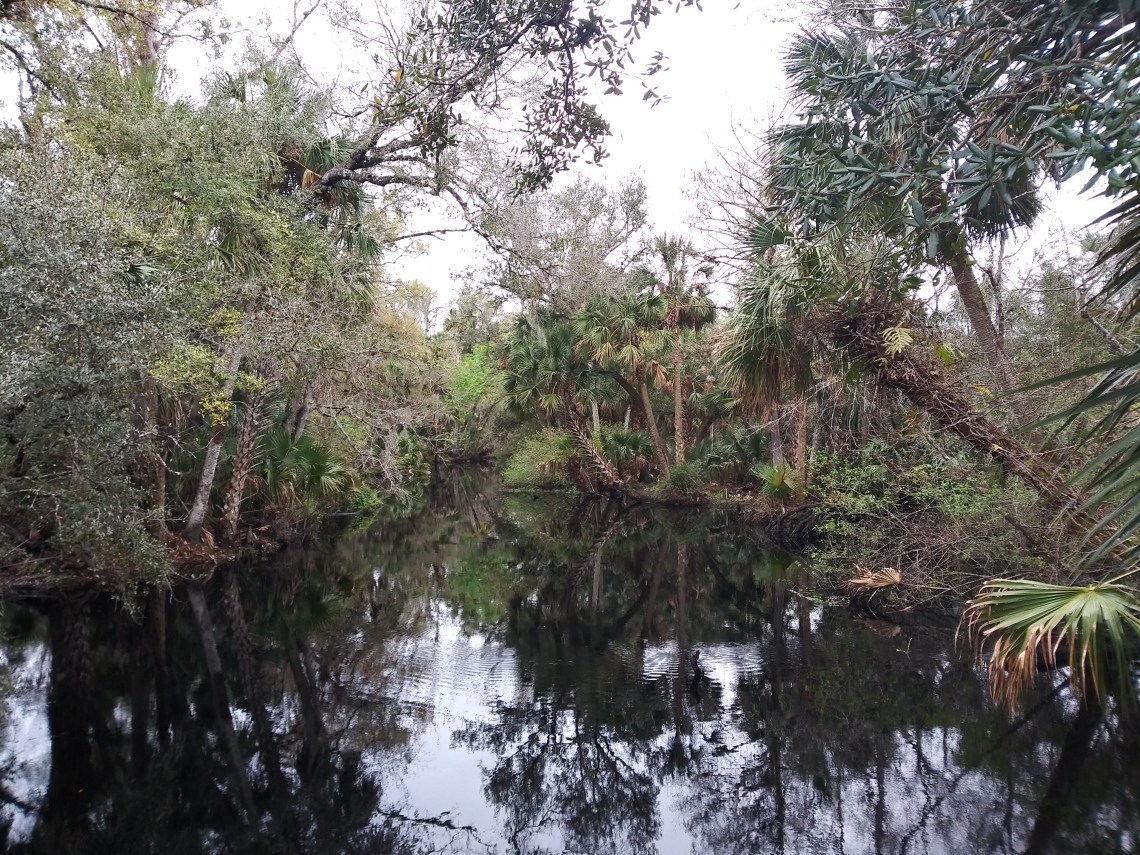 The things you walk past on the Florida Trail are amazing

this is shark tooth spring. Small, but delicious water it’s and pretty cool that shark teeth come out of there in central Florida